Crave Fishbar leaves something to crave

I recently dined here on a warm Sunday night. The front of the restaurant was open so there was plenty of fresh air. And because we had reservations, we didn’t have to wait, but it was definitely pretty busy and popular around 8pm.

We started out with a few appetizers on this particular night. The spicy tuna was delicious with a noticeably spicy kick to it, well balanced by the warm yuca it sat on top of (Spoiler: this was the best dish of the night). 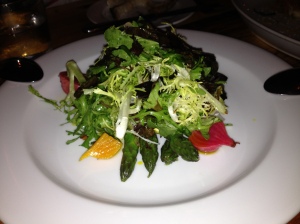 The beet salad was a bit salty because of the added salt, but it was not overdressed by any means.

Finally, the octopus was soft and had a tender texture that went well with the mild flavor from the harissa, all on top of some quinoa that was cooked so it was no longer crunchy. 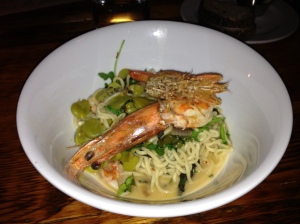 For our entrees, I ordered the noodles with head on prawns. The noodles were wavy medium thick noodles, like ones you’d order in a ramen shop. There was a nice initial spicy hint from some red chili flakes and a good salt seafood flavor from the prawns. In terms of portion, there was one whole prawn and bits of another hidden among the noodles. The prawns were big and meaty, almost like miniature lobsters. Some green vegetables also added a slightly bitter taste to the dish as well. Overall, it was decent.

The other entrees at the table included the flounder and tilefish. Unfortunately, both were just ok. The fish were not the freshest, so they were somewhat bland and did not have much flavor by themselves. They were garnished and seasoned on the surface, but that did not compensate for the dishes as a whole.

On the plus side, service was good. Decor is nice with a wood seafaring theme (even my interior designer friend approved of the lights and atmosphere). Although, I thought the ambiance didn’t quite fit with the asian inspired menu, or vice versa. The restaurant is not terribly big, which gives it a slightly intimate feeling. However, with the medium volume music and energetic crowd, expect to repeat a few sentences here and there. An interesting touch is that their wine menu includes characteristics of each wine, helping the customer choose the appropriate glass or bottle for the meal.

It’s still early, so they do have some kinks to work out; but once they do, I believe this will be a nice addition to the area.